bin Laden's in heaven? We know this for sure?
Sorry, couldn't resist. :-)

Matthew Paul Turner shared this cartoon as part of his ongoing "Jesus Pictures" series. What do you think? 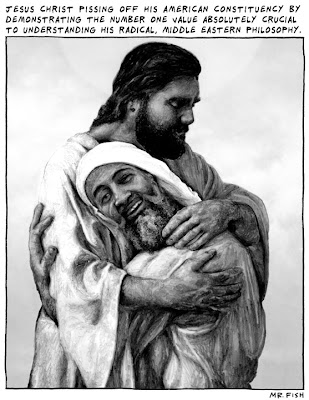 The easiest thing to do is get offended by the image (and the language). We could get our dander up about the idea of Jesus embracing a mass murderer who hated him. The cartoon is set up to shame those who'd be offended by it, so it's sort of the artistic equivalent of "Did you stop beating your wife?" Instead, though, let's think about this for a minute . . .

1. I'm not sure what is meant by "radical Middle Eastern philosophy." Is that a dig at bin Laden's errant Middle Eastern philosophy? Or a statement to somehow say that Jesus was really in keeping with Middle Eastern values, while bin Laden was not? I doubt the former, because the aim of the caption appears to be squarely on conservative evangelical Americans. I guess the latter, then, which is not just silly but wrong. Jesus' "philosophy" on loving one's enemies -- the notion of grace itself -- is counter to all of our philosophies, and it was just as radical to Middle Easterners in the first century as it is today. "Love your enemies" is a Christian thing, not a Middle Eastern thing.

2. The caption cuts against what the image is meant to convey. Without the caption, the image might've been a powerful statement about grace or what-have-you. Even if you believe -- as I do -- that the odds are best that Osama bin Laden was not embraced by Jesus at his death but subjected to the judgment seat and thrown into eternal judgment, you could see the image as symbolic, not literal. Certainly Jesus embraces murderers. Repentant murderers, sure, but as a symbol, the cartoon could make sense. But with the caption, the cartoon just reveals the artist's hypocrisy. There is grace for bin Laden, of course, but not for Jesus' American constituency, who deserve to be p*ssed off.

3. This image, properly considered, is boring. Very, very boring. It is designed as a cheap poke at "conservative evangelicals" and as a satisfying chuckle (or act of poignancy, apparently -- Turner says it made him tear up) to those who enjoy needling them, which makes it a failure as an act of bravery and grace-exaltation. Sure, it means to provoke us to consider just how radical grace is. God's love is big enough to capture a mass murderer! Of course it is. But the flip side of understanding that no sin is too big that Christ's sacrifice can't cover it is the understanding that no goodness is so good that it still doesn't need grace. The really provocative cartoon would not be bin Laden in heaven but -- oh, I don't know, say -- Gandhi in the fires of hell. But that would offend the wrong people.
Tweet
Posted by Jared at 8:43 AM

Amen, Jared. You said it best. It's just a trite, worn out image meant to offend. Somehow, the cartoonist does exactly what he accuses evangelicals of doing - abusing Jesus to offend and shame others. Lame.

Matt, indeed it does.

But I think that phrase has officially jumped the shark. Without expansion, it is meaningless.

Whose love wins?
And how does it do so?

Summing up the Bible's detailed, expansive, complex revelation of God's love in a two-word soundbite is a loss.

Hey, you got chocolate in my peanut butter!

You got peanut butter on my chocolate!

I love Reese's any way you put it!

If the caption was chopped out, I think I would have just looked at it and would have looked and shrugged. Too generic to be shocking, too predictable to be offending.


The caption is merely standard-issue Internet Trolling. It's (hopefully) intentionally ignorant of what it is criticizing, and merely wants to get a rise out of people.

And does the author know any Christians beyond the "American Constituency"? Are we assuming that the Coptic in Egypt are in favor of this notion? Did the Nigerian Anglicans assume Osama was welcomed in? Are Christians in Northern India and Bangladesh imagining Jesus and Osama embracing?

There's not much here, really.

Jeffrey Dahmer apparently repented and turned to Christ before he was killed in prison. If so, then in spite of his horrific evil he's received just this kind of embrace from Christ.

The cartoon isn't offensive for claiming Christ forgives evil men, but that the only really evil people are American evangelicals. I am sick to death of the milquetoast, hipster, progressive Jesus.