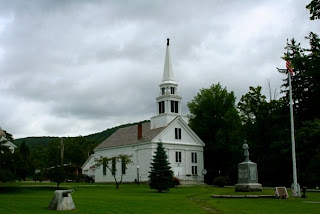 The photo is of the building in which Middletown Springs Community Church, the church I pastor, gathers each week.

The quote is something I've heard several times -- that or something like it -- typically from friends and family hailing from some steamy portion of Six Flags Over Jesus where church buildings are indistinguishable from office parks or the galleria.

Our church is "cute." Because it's small, old, traditional. "Cute" is the backhanded compliment for those who'd never go to a "cute" church, but want you to know they admire it and perhaps even those who aren't privileged enough to go to a church "successful" enough for a building that is big, impressive, full-service. You know, not cute, but rather "awesome."

But our church isn't "cute." It's beautiful like a bride both blemished and perfect.

Our building is just a building, but it has stood for over 200 years on the stony soil of the oldest part of our nation, the land of Christian pillars Whitefield and Edwards, of the Great Awakenings, of Puritans and patriots, of Green Mountain Boys and hundreds-of-years-old family farms. The building is just a building but it has weathered over 200 years of harsh Vermont winters, not to mention pastors strong and weak, congregations passionate and passive, spiritual ebbs and flows of Old Testament proportions. Once upon a time the church kicked out Joseph Smith's secretary for heresy.

Our building is just a building, but it's not just a building. It's a symbol of the enduring evangelical presence, small but hearty, in this least-churched state in the nation, and of the endurance of the great salt-of-the-earth people who are the church that gathers in the building for which they're called.

The gates of hell will prevail against espresso bars and KidzTowns. But not our church.

Our church is not cute. It is epic.

You're right on. I come from espresso bars and Kidztown craziness but this summer I've been blessed to work in a "building" in Boston similar to yours in Vermont. I've seen what my espresso bar church has to offer, and they "do" great things, but since I've been here in NE I've seen The Church in many ways more deeply and clearly than ever before. I've seen this church sacrifice so much for the gospel and the people of this city. We have missions teams from my home church come in for a week's time and they say our church here is "cute". But I'm glad to be at the church where I am now where the people who show up to church on Sunday morning come because they really want to be there, and not because it's expected of them.

You are continually encouraging to me.

Doggone it, Jared, you just make me miss you all the more. Cut it out.

It's like you're writing about my life, man! We're in a similar boat over here in Western Europe, and "cute" is the first thing our American friends say. The second thing said is, "Wow, it must be hard for you to have to minister there every Sunday. Don't you miss 'normal' church?" They just don't get it; I'm the one in a normal church. I just couldn't go back to the pasterpreneur mega McChurch model. God bless your faithfulness to see things how they really are.

It's a beautiful building, and a much more beautiful bride inside. I've enjoyed your blog for quite a while. Keep shining the light in Vermont.

I always enjoy your posts, Jared. This one even more than usual. (Sola Gratia: Not Just a Cute Church)

As someone who loves architecture and is a photographer, your church is amazing work of art. It's sad that our sense of history only lasts as long as our last Tweet.

didn't have time to read your blog post, but love the picture. that is such a cute church.

I don't care about the coffee shops & huge stadiums... but I also don't care for little cute white buildings with steeples. The building the church gathers at is really insignificant to me. BUT after reading this - I love how long this building has been around and see what it stands for... wonderful message I really wouldn't have thought about before... usually when I see buildings like this down south I just picture all the old people that you'd see in there... love them.

I didn't realize your church met in a traditional church building.

and I'm confused - I thought your church group was Element Church?

Randi, it was. You can read this for the development:
http://gospeldrivenchurch.blogspot.com/2010/03/why-i-moved-to-new-england.html

Oh goodness. I just found your blog early this morning and I have been reading and poking around ever since, and it's almost time for me to grab some lunch, but I can't stop reading, you have touched on some really great points, but this post nearly brought tears to my eyes. I am so homesick for New England. You are so blessed to have a "cute church" I miss the little baptist church I first went to after getting saved, it felt like family, like home and I loved all the older people, they really took me under their wing, I was the youngest person there besides the pastors little boy who was 2yrs old. My church was also in New England where I grew up. I got married to the love of my life there @ Market St. Baptist. and then we moved out to the fingerlakes region of New York where my hubby grew up and we started attending Calvary Chapel, it used to be an old skating rink it has a coffee shope and a bookstore and it feels less like family and home and more like a business (just sayin). I miss the potlucks @ my old baptist church and how small it was, we all knew eachother and there was a sense of community, some people called it quaint. I called it LOVELY ;) The Pastor even had a midweek study @ his house and his wife made yummy cookies.
We have been @ calvary almost 6 yrs now and it still does not feel like home ;( It's so huge. There are many other reasons, but I'm not here to bash on my church.
You sure have something special.
God Bless you and your family, and your "Cute" church.
Molly