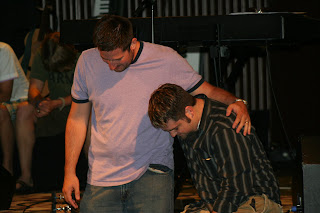 Last night at Element we said goodbye to our founder and fearless leader, Chris Thomas, who is stepping down from his gig as our church's technical director to accept the position of Weekend Lighting Director for Willow Creek Community Church in Chicago. This really is the end of an era for a lot of us (albeit a short "era," of course).
In addition to having his "handprints and heartprints" all over nearly everything our church has done for the last four years, as our lead pastor said in his formal goodbye to Chris from the main stage this weekend, this community for college and young professionals our church calls Element would not exist if not for Chris.

In addition to all that, he's my best friend here.

It's a really weird thing, you know. Last year, I was just minding my own business, and a few other peoples', just blogging away at BCC is Broken, and some dude I don't even know emails to ask if I've ever thought about teaching twentysomethings. I'm thinking, "Who is this person, and how is he reading my mind?"
So then I'm sitting across from this hobbity person at Panera, trying to impress him with my knowledge of emerging generational culture, and he's nodding a lot, so I think he's totally on the same page with me, but really it was just that he had no idea what I was talking about. :-)

I had no idea I was eating dinner and trying to impress the dude who'd become my best friend. The dude I'd been waiting ten years to meet.

Element and the people attached to it mean the world to my family. And we would not have this fulfillment, would not have met these people, would not have had this huge gaping hole in our family's heart filled if it weren't for Chris. He doesn't handle compliments very well, but I had to tell him he is an answer to years of prayer.

Let me tell you about Chris: He's a phenomenal and gifted leader, made all the more phenomenal and gifted because he is incredibly humble and does not realize how gifted he is at it. People just follow his lead. He also thinks the best of people, anyone and everyone, despite who they are and what they've done. He has a natural grace toward people, even those who treat him poorly, that is incredible. He just has this knack of seeing people as children of God.
And on top of all that, he is a great and loyal friend. He's a fantastic confidante. And he's hilarious.

I don't know how Element will transition through this great loss, as Chris is irreplaceable.

Anyways . . . that's my friend. I hope you who don't know him don't mind this excursion into a bit more personal blogging.

(The photo shows Jared and Chris (l. to r.) praying in Chris's farewell toast at last night's Element service.)
Tweet
Posted by Jared at 10:55 AM

Its always a good thing to honor a faithful and Godly servant. I believe the church needs to do more of it. I am sure God is pleased that you would honor Chris in this way. You have both been mutually blessed in ministry, and I am sure both of you are held close to the Father's heart.
Blessings to both of you.

Yeah, it's tough when parting with good friends. Good thing the Internet makes the world a little smaller. Thanks for sharing that.